The opposite of love is not hate, its indifference. Arguments don’t occur if two people don’t care about each other. Surprisingly, the first year of your relationship, it’s normal to have arguments here and there, over things you will encounter together this first year. This, most likely, occurs because both of you are different individuals with their own thoughts and emotions. 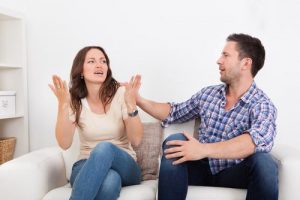 Don’t despair, because fighting (healthy arguments) in the first year is actually a good sign, and it will determine how compatible you are as your relationship grows, as you learn about each other’s likes and dislikes. This gives you the courage to go deeper into each others emotions allowing you to bond deeper and connect as soulmates, rather than just settling for someone that you’re not really happy with.

You would think arguing in the first year would be detrimental to the relationship, but if you are fighting during the first year its just the opposite. These two people have a lot at stake here, and by working through all these rough patches along the way shows they care to take the time to smooth things out, setting the stage for a lasting relationship.

Animal behaviorists study animals and how they react and how that relates to human behavior, and when animals are acting weird and not on their normal baseline behavior, it usually has something to do with the opposite sex and especially if expressing overly aggressive behavior.

When an argument occurs, its important you do not say or do anything destructive to each other such as name calling, threatening, intimidating, breaking or throwing objects, or any kind of physical abuse, is not acceptable. Another important thing to remember is to not use weapons, such as, using something against your partner that he or she has previously told you in order to try and win an argument. Remember, no one ever wins an argument, it is not a competition. If you’ve found you’re having a high conflict argument, give that person space to talk about it, and when you’re not talking you should be listening.

Examples of actions or words to be avoided during an argument

Try to stay on track and remember, it is you and your partner facing a third enemy. The enemy is not you or your partner, its the misunderstanding. So think of it as this: You and your partner are a team and you are working together to defeat the enemy (the misunderstanding). When you both work together as a team on this conflict and see this from a different angle, then its really quite simple. We can then resolve the issue and face it together then becoming  a more solid and connected couple.