There is scientific proof that the brains of men and women are quite different. Four distinct parts of each brain studied included, the processing center, chemistry, structure, and activity.

The difference between male and female brains in these areas show up all over the world but in some cases, there are exceptions to every so-called specific gender rules. Have you seen that some men may be more sensitive, and immensely talkative about their feelings and just generally don’t seem to fit the stereotypical way we usually see men react.

With all gender differences, there is no way of doing things in a better or worse sense. The differences listed are simply a guide that shows a pattern of typical brain functioning. Remembering that all differences have their advantages and disadvantages. 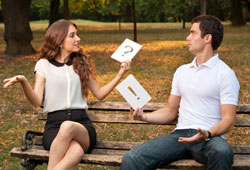 Here we will talk about the processing part of the brain. Scientific studies show females utilize nearly ten times more white matter and male brains utilize seven times more gray matter for activity, but what does this mean?

Gray matter areas of the brain the information and action processing centers in certain splotches in a specific area of the brain. This can sort of translate into a kind of tunnel vision especially when they are doing something. It seems once they are engaged in something such as reading or some sort of task, they might not seem like they are very sensitive to the other people or their surroundings.

Let’s talk about the white matter. This is the networking grid that connects the brain’s gray matter and the other processing centers with one another. This brain processing difference is possibly one of the reasons you might have noticed that women tend to be able to transition between more tasks than boys do. The gray-white matter may explain why, in adulthood, the females are able to be very good in multi-tasking. while men exceed in highly task-focused projects. 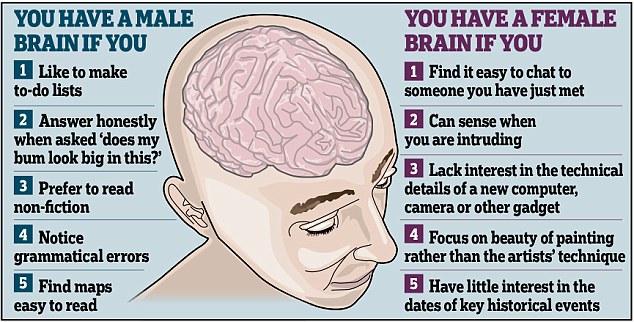 Female and male brains process the same neurochemicals but to a different degree and gender-specific body-brain connections. Some dominant neurochemicals are serotonin, among other things that help us set still, Testosterone is the sex and aggression chemical, estrogen, a female growth and reproductive chemical, oxytocin is a bonding relationship chemical.

So the differences in processing these chemicals the men on average have less of a tendency to set still than a woman, as females tend to be more physically impulsive and aggressive. Males process less of the bonding chemical oxytocin than the female brains do. This major chemistry difference shows why a woman, may seem to be much more emotional than the male because the female brain has a bigger limbic system than the males. Although as mentioned above there may be certain males exhibiting just as much emotion as the females, so it all depends on the certain individual. No one person, of course, is the same.

A number of structural elements in the male and female brain differ in male’s and female’s “structural” refers to parts of the brain and the way they are built, including the size or mass. Females most often are found to have a larger hippocampus, our human memory center. Females often have higher densities of neural connections into the hippocampus, this resulting in females tending to absorb more sensorial connections into the hippocampus than males do.

Before males and females are born, the right and left hemispheres in males and females develop with different hemispheric divisions of labor and are not set up the same way. For instance females a more likely to have verbal centers on both sides of the brain, while males seem to have verbal centers only on the left side of the brain “hemisphere,” that is a significant difference in the male vs. the female brain.

This could explain why females seem to have a sense of what is going on through the day such as being more aware of their surroundings and seem to be able to retain the sensorial information more than the males do. Females may use more words during a discussion than a male does.

Activity and blood flow of the male and female part of the brain.

Scientific studies show the difference between the male and female activity part of the brain, shows females have more blood flow (whiter matter processing in the brain) resulting in the ability to revisit past emotional states more so than the males.

Males are designed a bit different (using less white matter of the brain) handling emotional states, males tend to reflect more briefly on emotional memories, quickly analyze them and move on to the next thing. This may result in males seemingly having fewer emotions than females but it’s not necessarily the case, they are just wired to problem solve then move on, sometimes just changing course and doing something unrelated to feelings. Thus making them look less emotional.

So when you’re in a relationship it may be a great idea in understanding each other’s way of thinking, processing, and handling situations. This may, in turn, help a couple more understand why their partner may be the way they are, simply because male and female brains are so very different. So the next time you are standing there scratching your head and looking at your partner like they are from a different planet, think of the way we are all wired so differently.

I hope this helps some in understanding your partner’s way of thinking and may help things go smoother the next time your partner reacts in a certain situation.